East Tennessee Lions trekked to Roanoke for our semi-annual workday at the Eyeglass Recycling Center on Saturday March 24, and 3 Johnson City Lions joined the effort.  Recycling Chairman Ken Gough, incoming President John Merriss and new member Jim Paveglio got up way too early, drove through dark and rain (no sleet or snow this year, luckily) and went to work about 9:00.  They took 2,150 pairs of glasses collected by the JC Lions over the last 6 months, which joined a big pile waiting to be sorted and recycled. 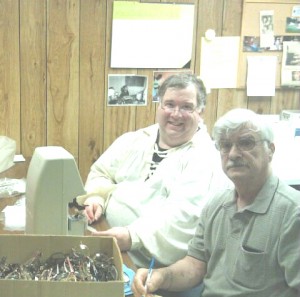 Lion Ken went to work with a will, assembling a store room full of shipping boxes.  Lion John likes running the prescription reading machines and spent his day there.  Lion Jim, being new to the operation, got the grand tour from Kingsport Lion and East Tennessee Recycling Coordinator Harry Ennis, and then learned to use the readers.  Meanwhile a group from the Knoxville area was hard at work on the first sorting operation, putting glasses into 3 piles – usable glasses, sunglasses, and broken frames.

The usable glasses are thoroughly cleaned before prescription reading and sorting, after which comes packing and shipping.  Broken glasses largely pay for the operation of the recycling center – many of the metals in the frames, in particular the gold, are very valuable, and find a ready market.  Sunglasses are sent primarily to tropical countries. 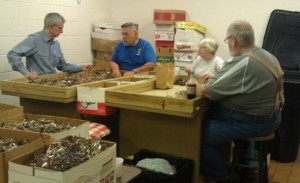 The party broke up around 3:00.  We left behind hundreds of pairs of glasses ready to pack and ship, a roomful of shipping boxes, several hundred pounds of broken frames ready for recycling, and a much smaller pile of unsorted glasses than we found.  Time to prepare for the next trip in October 2012!