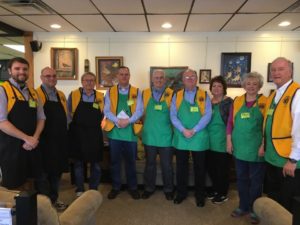 As part of Lion’s International Week to Fight Worldwide Hunger, January 9-12, the Johnson City Lion’s Club partnered with One Acre Café in Johnson City.  The club volunteered at the Café on January 12, 2017 and served as hosts/hostesses, waiters, servers, and “busboys”.  The One Acre’ Café operates under the philosophy that everyone eats regardless of their ability to pay.  Through their Pay It Forward program, patrons can insure that another guest will be able to eat in the future.

This project, and several others throughout the year, are part of a series of Centennial Service Projects that Lion’s International is undertaking.  It is estimated that service projects in the last year have impacted 100 million people throughout the world.