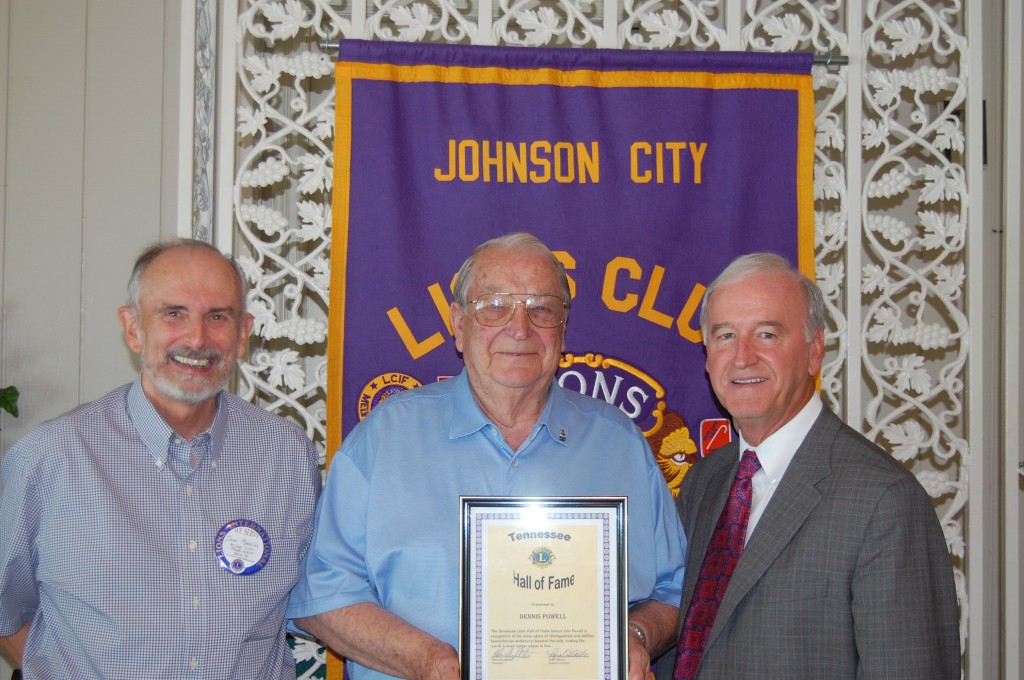 July 24, 2012 – Past District Governor Dennis Powell, a member of the Johnson City Lions Club for over 50 years, has been recognized for his outstanding service to Tennessee Lionism by election to the Tennessee Lions Hall of Fame.

Our own Ed Gibbons, current District 12N 2nd Vice District Governor, made the following statement at the presentation:

TODAY MARKS A PLACE IN HISTORY FOR OUR JOHNSON CITY LIONS CLUB. NEVER BEFORE HAS A MEMBER OF OUR CLUB BEEN RECOGNIZED FOR THE TREMENDOUS AMOUNT OF WORK HE HAS DONE FOR OUR CLUB AND COMMUNITY. THIS HONOR PUTS OUR JOHNSON CITY LIONS CLUB AT THE FOREFRONT OF ALL THE CLUBS IN THE STATE OF TENNESSEE. YOU DO NOT KNOW HOW PROUD I AM TO STAND BEFORE YOU TO HONOR SOMEONE WHO IS DEAR TO ME AND TO THE JOHNSON CITY LIONS CLUB. IN MY TRAVELS ACROSS THE DISTRICT 12N, I HAVE ALWAYS ADMIRED THE RESPECT HE GARNERS FROM OTHER LIONS IN THE DISTRICT. I WAS SO HONORED MYSELF THAT HE TOOK THE TIME TO GO WITH ME TO THE DISTRICT 12N CONVENTION THIS PAST YEAR AND PRESENT ME TO THE DISTRICT 12N AS THE NEXT INCOMING 2ND VICE DISTRICT GOVERNOR. AS YOU KNOW BY NOW THAT PERSON IS OUR OWN PAST DISTRICT GOVERNOR LION DENNIS POWELL. LION DENNIS HAS BEEN ELECTED TO THE TENNESSE LIONS HALL OF FAME.

In his letter of nomination, King Lion John Merriss cited a long list of accomplishments, including:

VDG Ed’s presentation was repeatedly interrupted by applause and twice by standing ovations, demonstrating the high esteem in which Dennis is held by his fellow Johnson City Lions.  We are truly honored to have such a fine man in our club.